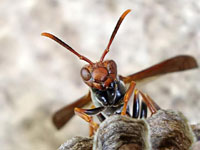 Spring and summer can bring on sneezing and scratching for a lot of allergy sufferers. But when symptoms get worse, an allergic reaction can quickly turn into anaphylaxis, a potentially fatal situation.

“It is an allergic reaction that can cause itching, hives, nasal and eye symptoms, shortness of breath, coughing, nausea, light-headedness, passing out, and in the worst case scenario is death,” said Dr. Jill Poole, an internist at the University of Nebraska Medical Center. Insect stings are a leading cause of anaphylaxis, along with food and latex allergies.

Poole said anaphylaxis is a hot topic among doctors because the incidence of reported allergy sufferers is rising in the U.S. Existing allergies or asthma can be a risk factor for critical or fatal reactions to allergens. Poole said most people who are allergic to insects probably won’t know until they’re at least 12 years old, and most don’t learn until they are in their 20s or 30s.

Insect stings cause about 500,000 allergy – and anaphylaxis-related emergency visits and at least 50 deaths each year, according to a news release from the American College of Emergency Physicians. About 30,000 trips to the nation’s emergency rooms each year are blamed on food reactions.

“Some of the more common food reactions are tree nuts, pine nuts (and) peanuts – people have allergies to fruit, eggs, milk products, shellfish,” said Dr. Rita Cydulka, a professor in the Department of Emergency Medicine at Case Western Reserve University School of Medicine.

Food allergies tend to be diagnosed very early in life, the doctors said. In fact, there are medical specialties dedicated to helping the parents of infants and toddlers to identify food allergies and design menus.

Cydulka said summer is prime time for food allergies, too. More people eat at food festivals in the summer and can’t be sure what’s in their meals. She recounted a story of one of her own patients.

“Probably one of the worst stories of my career was July 4. I was living in Chicago, working ER. They brought in a 23-year-old man who had a peanut allergy and went to Thai booth. He asked if they cooked with nuts. They said no, and he ate the food. He had a severe anaphylactic reaction, and rather than go to the medical tent at the festival, he started walking toward the hospital. He died of cardiac arrest on the way,” she said.

Why Are There More Problems?

Why are more people developing allergic and anaphylactic reactions? Poole said about 0.5 percent of children have problems with venom allergies, and 3 to 5 percent of adults will have bad reactions to stings. Poole said the jury is still out on causes, but one theory is known as the “hygiene hypothesis” – that Western countries are at a point of development where the body’s natural defenses aren’t used very much.

“Clean water, antibiotics, no parasites – our immune system is built to fight off infection and bad things, so when we don’t have anything for the body to do, it tends to react to cats or pollen or food,” Poole said. “It’s a robust immune response.”

Poole said other theories include more pets in people’s homes and more pollution in the air.

So how can you protect yourself, even if you don’t know you’re allergic?

“Protection is avoidance. That’s the key,” Cydulka said. “If you know you have an insect allergy, if you know you’re sensitive, avoid places where there are lots of bees. Avoid wearing lotions that are scented. It’s not advisable to be outside eating during bee season. One of things we see is bees flying into a can of pop and then people drink it and they sting them.”

Also, sufferers are encouraged to carry epinephrine and Benadryl to administer to themselves in the event of a whole-body reaction.

Yellow jackets, the most aggressive of the stinging insects, tend to live around mounds or stumps, so be careful where you’re gardening or walking. Wear shoes outdoors so you don’t accidentally step on a stinging insect, and exterminate if you have an infestation.

If hives break out, breath gets short you have another extreme response, don’t wait to get help.

“If you start wheezing or other symptoms – whole-body reactions – you want to get to emergency care and not just take a Benadryl and wait it out,” Poole said.

“The data are pretty clear that one thing associated with death is lay treatment,” Cydulka said. “We actively encourage people to seek treatment. But treat yourself first, or be ready to.”