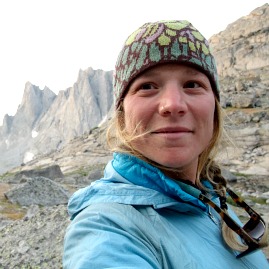 Lacy was introduced to her first love, the mountains, by working as a mountaineering guide in British Columbia at the impressionable age of 21. That first season of guiding spiraled into what is still her longest relationship 12 years later. Lacy spent several seasons as a mountaineering guide in British Columbia before becoming an Emergency Department RN. Lacy has been an ER RN for 7 years, in 4 different hospitals from rural to urban trauma centers. Lacy's been lucky enough to have flexibility as an RN to continue work as a mountaineering and climbing instructor and now a WMA instructor. Forever considering herself 'terminally intermediate', she spends her free time trying to do too many things: skiing, climbing, mountain biking, floating rivers, practicing yoga, throwing the ball for her dog Chance and running aimlessly all around her home in the great Pacific Northwest. Lacy decided to commit what time is left over to WMA after gaining firsthand knowledge that her WMA education was better than her RN education, a whole lot cheaper and way more fun, who wouldn't want to be a part of that?