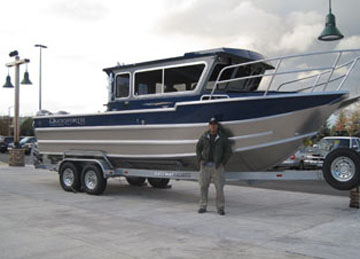 Roberto has served as a Park Ranger in the San Diego area for the past 20 years.  In that time, Roberto worked positions in rural, wilderness and for the past seven years in the metropolitan San Diego area.  Roberto believes in what he does as he is convinced that his efforts along with others protecting parks from people and people from parks is worth the effort.  So much so that Roberto and a fellow Park Ranger started a business four years ago that services government agencies and non-profit land management companies providing a mix of forestry and security professionals.  Roberto is a graduate of SDSU’s Geography Department.

Roberto was involved in search and rescue in San Diego from 1994 to 2008.  His first introduction was with a WFR course after taking an EMT course in 1996.  Since that first introduction, Roberto has certified and re-certified almost a dozen times and is currently a WEMT.  Roberto has been exposed to medical situations in the field and has always felt grateful for the confidence and realistic information that he has experienced training with WMA.

Roberto favorite outdoors sport of all is surfing.  Being a native of San Diego, he has the luxury of being in one of the best locations in the world to surf.   Roberto also enjoys trail running and hiking.  As well he has an expressed interest in mapping, archeology and anything nautical.